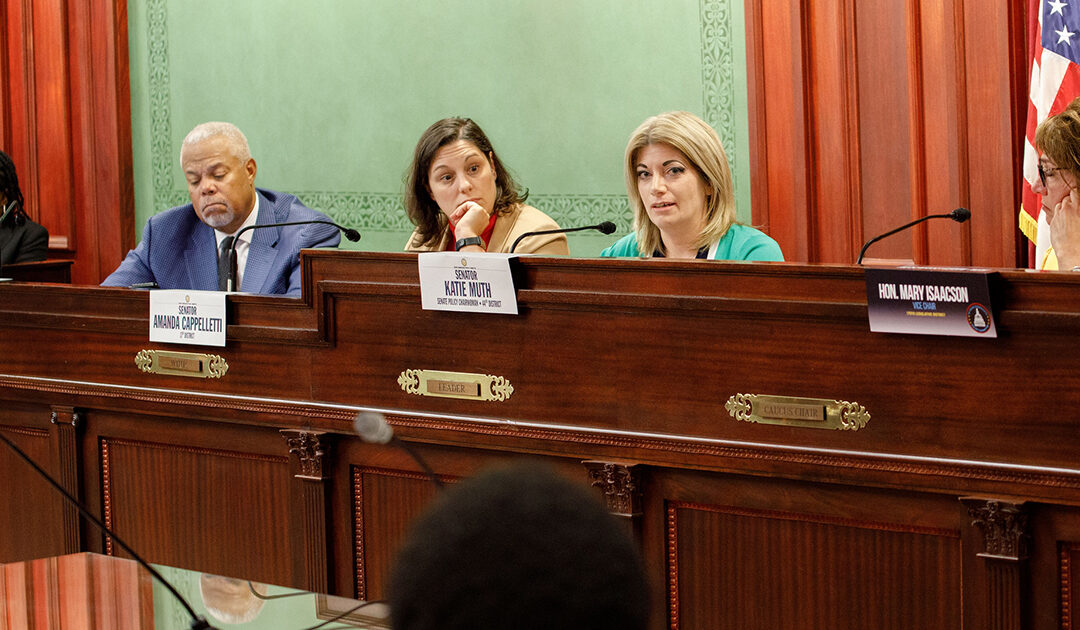 HARRISBURG, JULY 19– The House and Senate Policy Committees convened a hearing Tuesday morning to explore what the future of healthcare looks like in Pennsylvania after the Supreme Court of the United States overturned Roe v. Wade.

The hearing, co-hosted by Rep. Mary Isaacson (D-Philadelphia) and the Women’s Health Caucus, identified the facts and fiction of what the Supreme Court’s ruling means for people seeking abortion care in Pennsylvania.

“We need to make sure that misinformation is not being spread around. We’ve had to absorb the Supreme Court decision together as a nation and as a state, and we need to make sure Pennsylvanians are informed about the healthcare decisions they have despite this ruling,” said Isaacson.

The hearing featured testimony from Dr. Denise Johnson, the Acting Secretary and Physician General of the Pennsylvania Department of Health. Dr. Johnson reiterated that despite the Supreme Court’s ruling in the case of Dobbs v. Jackson Women’s Health Organization last month, Pennsylvanians are still able to access abortion care safely and legally in Pennsylvania.

“When the Dobbs decision was announced, the Department sent a letter communicating pertinent regulatory information to abortion providers in the Commonwealth,” said Dr. Johnson. “The Department remains committed to open communication with facilities, stakeholders, providers, and patients. By doing so, we want to ensure that providers have reliable access to information so that patient access to services is preserved.”

The Supreme Court’s decision triggered abortion bans in many states and endangered abortion access in many others. While Pennsylvania is not one of those states, the Republican-controlled legislature in Harrisburg has taken steps to restrict access and even outright ban abortions.

Dr. Johnson testified that if any of those proposals become law, lives will be lost.

“Bodily autonomy and privacy should be a human right. The consequences of forced pregnancy can be dangerous to maternal health and may increase chances of maternal morbidity. If abortion or emergency contraceptive services were to become further limited in Pennsylvania, it would likely exacerbate this crisis,” said Dr. Johnson.

Dr. Johnson also referenced the Turnaway Study, which assessed more than 1,000 women who were denied abortions in the United States five years post denial. The study showed that individuals unable to access abortion care experience more debt, are more likely to live in poverty, and are less likely to be able to work full-time.

“This study points to the negative impacts on health equity should any of the many attempts to restrict abortion care in Pennsylvania be successful. While Pennsylvanians still have rights to this important healthcare, we are one Republican governor away from having those rights stripped away,” said Rep. Mary Jo Daley (D-Montgomery), co-chair of the Women’s Health Caucus. “It’s so hard to sit and think that this is what we’re going through. We need to do everything we can to ensure everyone, including out-of-state residents, have access to abortion care in Pennsylvania.”

This hearing was the first in a series of three hearings the House and Senate Democratic Policy Committees, in partnership with the Women’s Health Caucus, will host regarding the topic of a post-Roe Pennsylvania. The second hearing will take place in Philadelphia on July 26th, the third hearing will happen in Pittsburgh on August 11th.

Information about these hearings and other House Democratic Policy Committee hearings can be found at pahouse.com/policy.