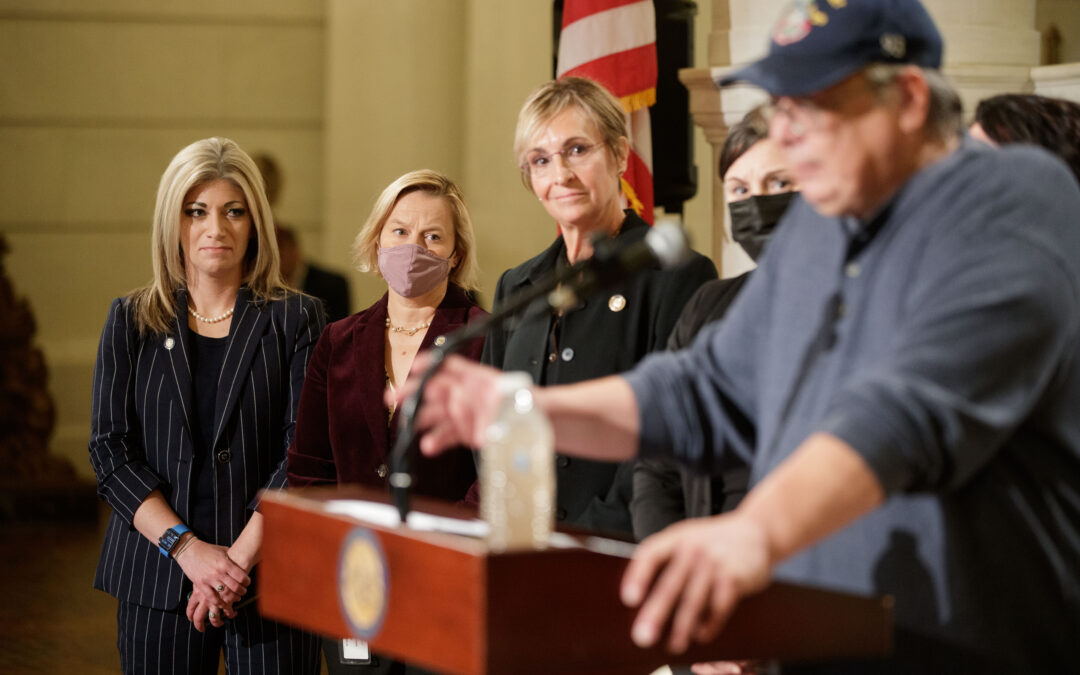 The event, Standing for the Right to Clean Water: Stories from The Mariner East Pipeline Project, featured residents from across the state whose lives have been altered by the project.

“Two years of testing and two years of DEP coming out, and they blame it on everyone else,” Patrick Robinson said, an Indiana County Naval veteran and ex-Halliburton employee whose water became contaminated days after drilling began on his property back in 2017. “When is this job going to be done, and when is it going to be corrected? How many people are going to have to suffer?”

“Access to clean water is a constitutional right for all Pennsylvanians, and the reckless behavior demonstrated by Energy Transfer during the construction of the Mariner East project has stripped residents of this basic necessity,” Herrin said. “These Pennsylvanians are not expendable. We call on Governor Wolf, the Department of Environmental Protection and the Public Utility Commission to do their jobs, protect our communities’ water rights and halt all permitting for this project until access to permanent, clean water has been restored to all affected residents.”

Herrin introduced her constituent, Fred Custer, a retired Sunoco employee who lives along the path of the pipeline project and whose private well (along with two of his neighbors’ wells) dried up.

“I’m a third-generation Sun oil retiree,” Custer said. “They were once the paragon of civic responsibility; however, this is not the company I worked for. All we are looking for is a reliable source for our water. We are not only extremely disappointed and fed up with Energy Transfer and their lack of civic responsibility, we are also disappointed by the Commonwealth of Pennsylvania’s lack of oversight and failure to protect its own citizens from these bad actors.”

The event comes after Pennsylvania’s attorney general leveled 48 criminal charges against Energy Transfer for numerous environmental crimes, including water contamination, failure to report spillage of drilling industrial waste and the use of unapproved drilling fluid additives.

“The testimony of these residents reinforces the recent findings by the Office of Attorney General and echoes the stories we’ve heard from property owners across 17 counties in our commonwealth since Mariner East construction began,” Otten said. “Energy Transfer has continually failed to meet its requirement to restore damaged private water supplies. The administration and the DEP have a duty and a responsibility to pull the permits, stop further construction of this pipeline and restore our citizens’ constitutional right to clean water.”

Since 2017, Energy Transfer has been issued more than 100 notices of violation and has been fined millions of dollars for violations related to construction of the Mariner East pipeline project.

“The permits for this project require any damaged drinking water supply to be replaced by the operator,” Muth said. “Sunoco makes billions in profits yet refuses to clean up their mess.  Pennsylvanians deserve better, and impacted residents are not disposable. It’s time state regulators use their executive and statutory authority to hold corporate polluters accountable.”

Muth introduced Ron Shawley, a Cambria County retired armed forces veteran, who has been without clean drinking water since Mariner East construction came through his property. “I shed my blood for this country to come home and not have clean drinking water,” Shawley said. “All I’m asking is to step it up and help.”

“Fines are clearly not a deterrent for this company, which continues to contaminate and drain residents’ drinking water supplies,” Herrin said. “We need this administration to stop construction now and until the requirements of all existing permits are met, and we need our fellow legislators to join us in creating meaningful accountability for polluters. Our communities and the people of Pennsylvania cannot afford inaction on access to clean water.”

The Mariner East pipeline project traverses more than 350 miles from western Pennsylvania to the Marcus Hook refinery in Delaware County, where highly volatile natural gas liquids are refined and transported to be shipped overseas to be made into plastic products.